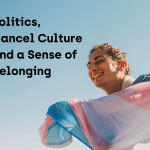 Why conversations about, rather than with trans people are so damaging

Yesterday I was scrolling through social media, and an ad come up for an article about a new Dave Chapelle special that was being brought out, in spite of controversy around his hurtful comments on trans people.

I often get these kinds of ads, which I suspect is because the algorithm knows I interact with posts related to trans issues. I knew I shouldn’t read the comments, but I couldn’t help it. I needed to know what was being said about me, about my community.

Before I was able to break away and lock my phone screen in disgust, the majority of posts I read referred to not giving in to “snowflakes” and that “if people are offended, they just shouldn’t watch the show”

I don’t watch Dave Chapelle specials, and I do my best to steer clear of anyone who “offends me” (i.e tries to invalidate my existence). This advice feels a little like the advice I was given in the schoolyard – “just ignore the bullies”, “sticks and stones” ect. It’s oversimplified and watered down so much it feels like a slap in the face – and that hurts far more than one comedian’s ignorant rants.

Those who have been subject to abuse or trauma know it isn’t so easy to “Just ignore things” This is a dangerous narrative. As social beings’ humans are affected by what others say to us. No-one is immune to this effect. When society already feels it wasn’t meant for you this gets amplified a thousand-fold. This isn’t just one article, one opinion, it’s death by a thousand cuts.

Far more dangerous and damaging than the show itself is what it symbolizes. Giving these people a pedestal is saying that invalidating and abusing trans people is acceptable. It means we no longer feel welcome, we feel shame just for existing, while others feel comfortable in their bigotry, and it encourages them to pursue us in a systematic way.

Enter the government’s latest political contributions – Firstly attempts to pass the religious discrimination bill, and now attacks on female trans athletes. Systematic oppression. A clear attempt by a desperate government to hold on to power by sympathising with extremists, and they are willing to throw us under the bus to get there. How could this make us feel anything but worthless in the eyes of our so-called leaders and protectors? Failing to protect at-risk children and communities from hate crimes, under a guise of “protecting the vulnerable” (i.e institutions with a long history of clutching power at all costs). This twisted irony only drives the knife deeper.

It’s a strange and intense feeling, when you and your community feel so ostracised, so vilified by your community at large, for something that’s inherently you. People referring to us as “snowflakes” seems quite strange to me, given they would rather defend a tv show they like than give it up to protect a marginalised community; Or are too afraid of trans kids to even let them in the gates of their school.

Media and political climate feed each other, as people in positions of power – politicians, celebrities ect, are able to cast a wide net of influence – far wider than our community and allies are able to cast – this isn’t a debate, it’s not harmless and it’s not on an even playing field. To us it feels like a war.

These people may not realise what they are contributing to, but make no mistake; whether conscious or not, this systematic oppression is designed to eradicate us. There are those out there who want trans people to no longer exist and are taking active steps towards this. Supporting these narratives is saying that this is acceptable. It’s sending a message that says we don’t deserve to exist.

If society can admit the damage that’s being caused to LGBTQIA+ communities, then perhaps we can learn from history rather than repeating it. Perhaps we can remember how much advocacy it has taken from LGBTQIA+ advocates to get to this place of acceptance, as well as all the ways that accepting others has benefited us and made our lives richer and more peaceful. Some may always find issue with who we are, but so long as we are respected as humans and members of a society, we can feel valid and accepted.

Recent Posts
As Trans Day of Remembrance is fast approaching, we want to send our love, solidarity, and support to the many amazing trans folk.…

Trans Day of Remembrance – We can’t wait ‘til it’s too late!

Welcome News for Survivors of Abuse and Neglect in State Care